Since PFlow began with Bob Pfleger’s creation of the inclined vertical conveyor in 1977 – we have been leading the vertical reciprocating conveyor industry by continually improving our lift products.

These lift advancements serve not only to increase productivity across the world, but also to keep workers safe. You can view just some of our revolutionary lift patents below, then, check out our various material lift products to see them in action! A vertical conveyor for lifting materials between different vertical levels.

The conveyor comprises a pair of spaced upright supports or beams and a carriage to support a load or cargo is guided for vertical movement on the beams.

A hydraulic cylinder unit is associated with each beam and the ram or piston rod of each cylinder unit carries a first sheave, while a second sheave is located at the upper end of each beam.

A link chain formed of a plurality of interconnected loops is trained over each first and second sheave, and one end of each chain is dead-ended on the respective beam, while the opposite end of the chain is connected to the carriage.

Retraction of the piston rod will move the carriage upwardly to a second vertical level.

The axes of the first sheaves are located at 90° with respect to the axes of the second sheaves, so that the cylinder can be mounted tight against the beams to minimize the bending moment.

A horizontal shaft connects the second sheaves and synchronizes movement of the two chains. The vertical lift conveyor includes a drive assembly including a drive motor coupled to a drive shaft.

Each end of the drive shaft includes a first sprocket and a second sprocket that each engages one of a pair of lift chains.

The offset between the first and sprockets creates sinusoidal velocity profiles for the two chains that are out of phase with each other.

A connection block is used to connect the pair of lift chains to each side of the carriage combines the lift chain velocities into a linear vertical velocity for the carriage. 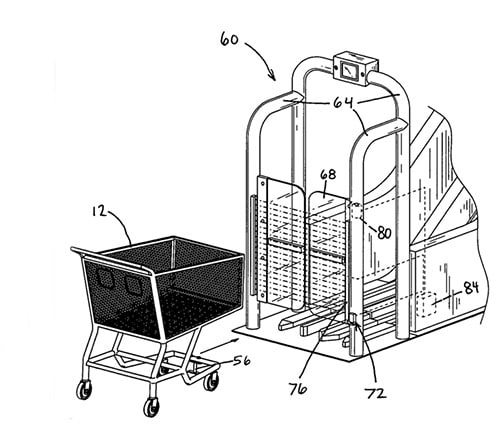 In one aspect, the invention provides a conveyor comprising a track operable to guide the shopping cart between a first location and a second location, a gate assembly including a door movable between a closed position inhibiting entry to the track and an open position allowing entry to the track, a lock for securing the door in the closed position, and a sensor (e.g., an ultrasonic sensor, an optical sensor, a radar sensor, an infrared sensor, an RFID reader, a magnetic sensor, and a mechanical sensor) positioned to detect the presence of a shopping cart.

In another aspect, the conveyor is configured to move the gate from the closed position to the open position when the sensor detects the presence of a shopping cart. Preferably this is done using a drive mechanism coupled to the gate. A vertical conveyor that includes a frame, a carriage, and a drive mechanism.

The frame includes a vertical support member, and the carriage is coupled to the frame to carry a load.

The carriage is mounted for movement along the vertical support member. The drive mechanism includes a first actuator and a second actuator. A multi-level vehicle lift comprising a first platform mounted for movement between a lowered position and a raised position.

Preferably, the pit is recessed into a ground surface, and an upper surface of the first platform is substantially flush with the ground surface when in the lowered position.